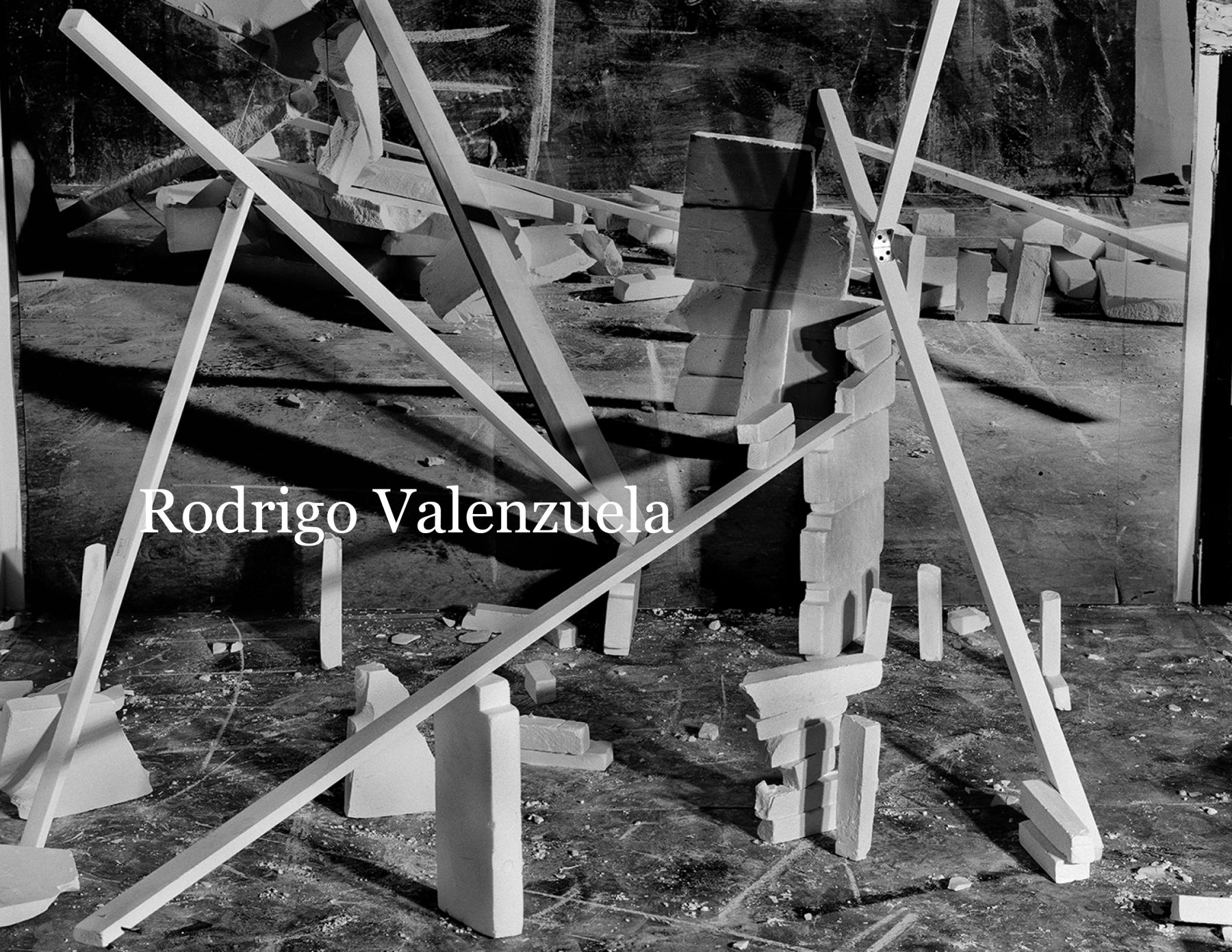 The Art of Labor 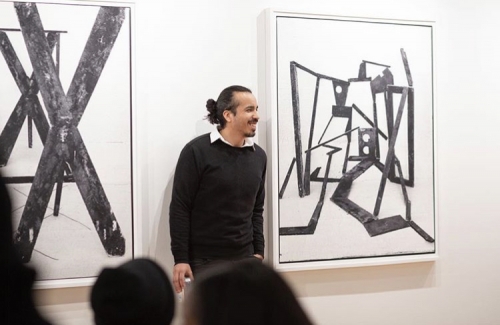 Rodrigo Valenzuela during an exhibition walkthrough of American Type at Light Work, February 2019.

Rodrigo Valenzuela works across photography, video, and installation, merging his interest in art history, architecture, the concept of work, and the realities of laborers. Valenzuela builds scenes in his studio, often working with simple building materials such as cinder blocks, pipes, wooden palettes, corrugated metal, and two-by-fours. The resulting monochrome photographs constantly shift between flatness and architectural space, and between documentary photography and fiction, encouraging an incessant yet pleasurable tension. His compositions resemble miniature ruins built from studio detritus, and are documentative of the artist's performance in the studio. Simultaneously, they clearly reference certain Modernist masters - be it Abstract-Expressionist painters or Minimalist sculptors - as well as Latin-American Brutalist architecture.

Valenzuela's interest in the political history and capitalism of construction is evident in the way he reuses and remixes objects before the camera. In Stature, his exhibition at Asya Geisberg Gallery, discarded consumer packaging is cast in concrete to create sculptures that could be Brutalist buildings or small abstract forms, elegant objets d’art or perhaps monuments to oppressive political regimes. Whether in “classic” black and white, low-contrast grey, or sepia works in the series Hedonic Reversal (2014), Barricade (2017), American Type (2018), and Stature (2020), Valenzuela consistently generates his own photographic vocabulary to present visually ambiguous images that resist easy categorization.

Rodrigo Valenzuela (b. 1982 in Chile) lives and works in Los Angeles. He completed an art history degree at the University of Chile (2004), then worked in construction while making art over his first decade in the United States, completing a BA in Philosophy at Evergreen College (2010) and an MFA at the University of Washington (2012). Currently, Valenzuela is an assistant professor in the Department of Art at the UCLA School of the Arts and Architecture. 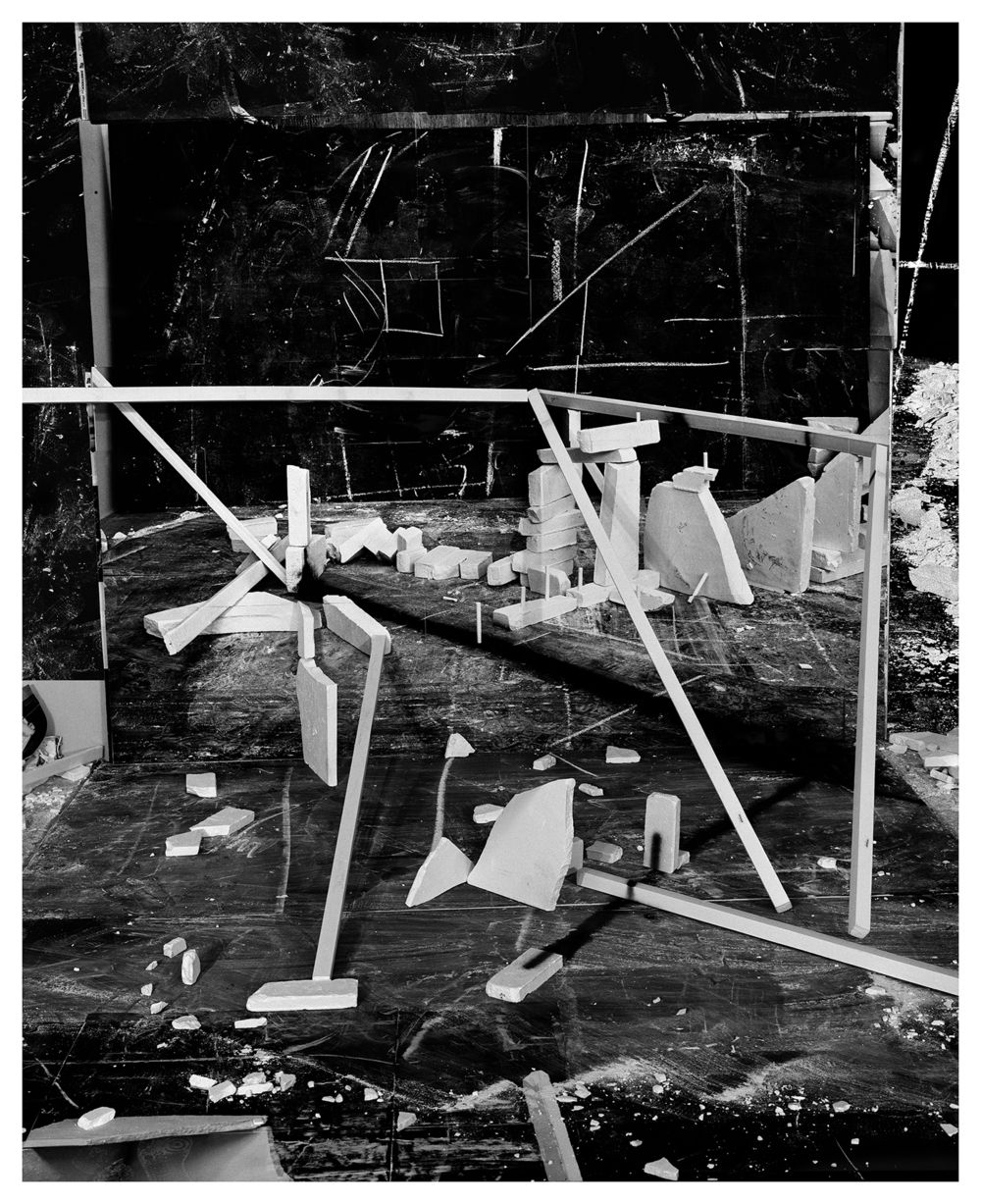 Hedonic Reversal was a large-scale installation commissioned by the Frye Art Museum, which encompassed broad discussions on class, race, and labor. “My story,” Valenzuela explains, “is essentially one of coming from a blue collar family, a family of workers. As a worker myself, I want to make a larger statement about everyday life.” His installation muses on “the aesthetic of ruins without the social or economic failures that accompany them.” Occupying uncertain territory between documentary and fiction, he lays bare hedonic reversal, a pleasure in pain that is foreign to him, a pleasure in social and cultural ruins: “I have been looking at how to construct ruins that don’t carry this pain. Are there ruins beyond decay?” As Valenzuela notes, his labor—his work—is to bring visibility and honor to those who construct, clean, and maintain the city, through the construction of a counternarrative for and about the working class. 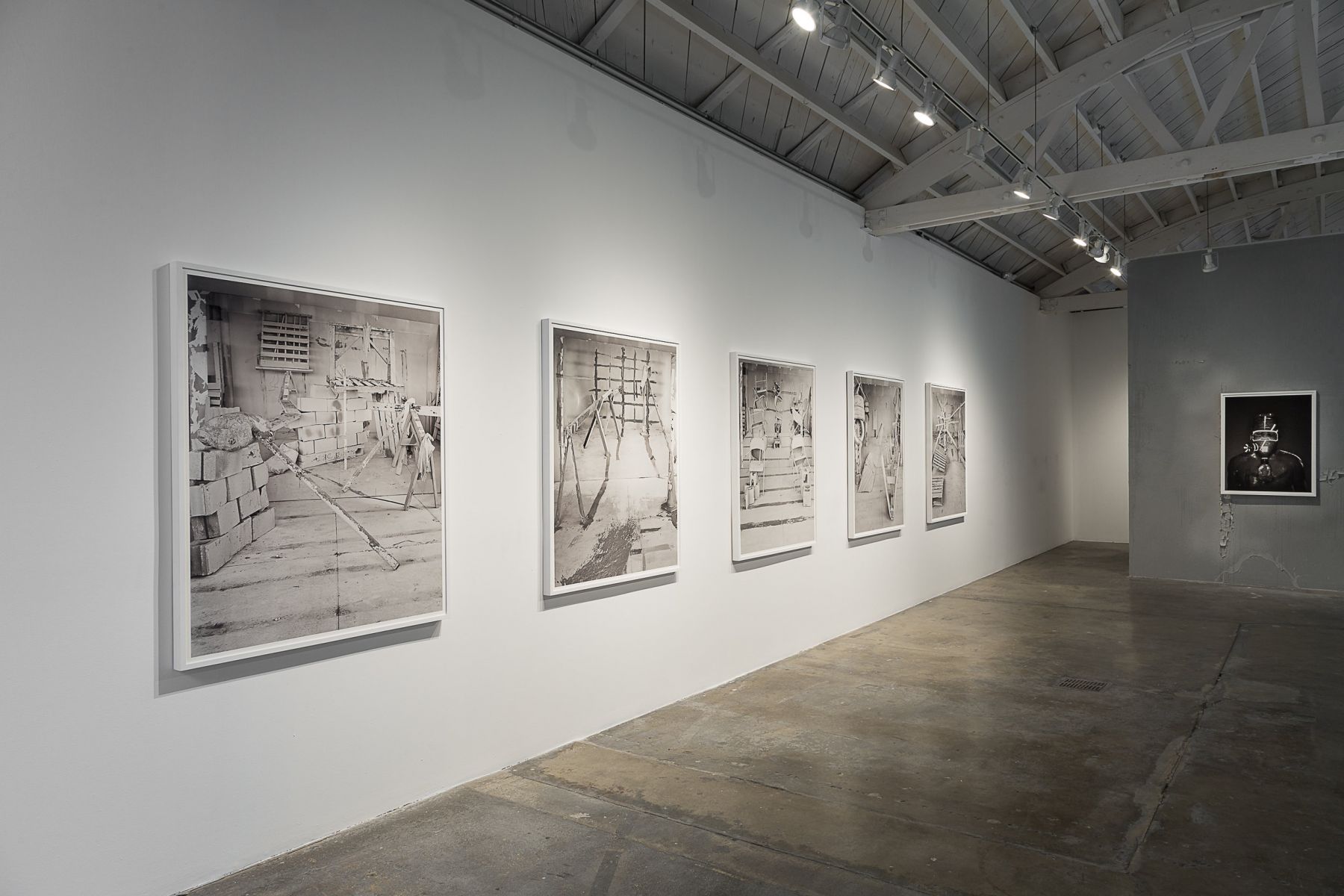 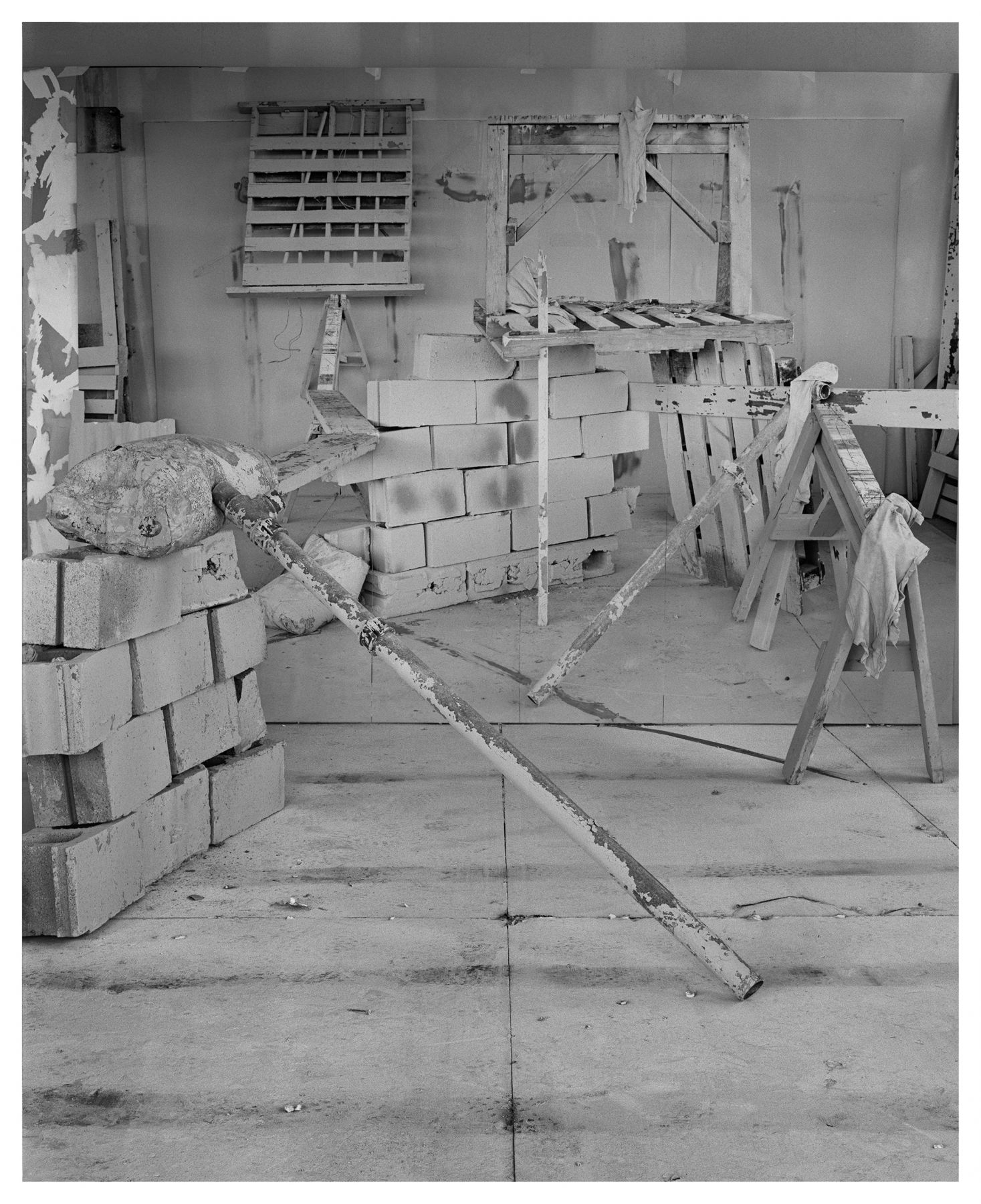 In General Song, Valenzuela abstracts and adapts images historically associated with protest. Drawing on his experience growing up under the dictatorship of Augusto Pinochet in his native Chile—as well as research on resistance movements in countries such as the Ukraine and Venezuela—the artist focuses on simple physical structures that people build in times of oppression as a means to explore civil disobedience. The show's installation is built around Valenzuela’s Barricade series, which began during his residency at Light Work in Syracuse, New York, in 2017. Valenzuela built barricades in his studio using materials historically associated with protest such as cinder blocks, pipes, wooden palettes, folding chairs, corrugated metal, and tires. He then photographed the installations with a medium-format film camera, creating large-scale prints and affixing them to the walls behind the original constructions. Finally, he rephotographed them, creating the illusion of a deeper and continuous space.

"I believe the monochromatic qualities [of using black and white] facilitate a simpler reading of the material. Sometimes color can be too descriptive of fashion, time and purpose. I’d rather focus on the objects’ most basic identification in order to associate these more freely and generate meaning in relationship to their common understanding through form and iconography."

-Rodrigo Valenzuela, from "The Picture Builder", an interview between Valenzuela and Christian Viveros-Fauné. 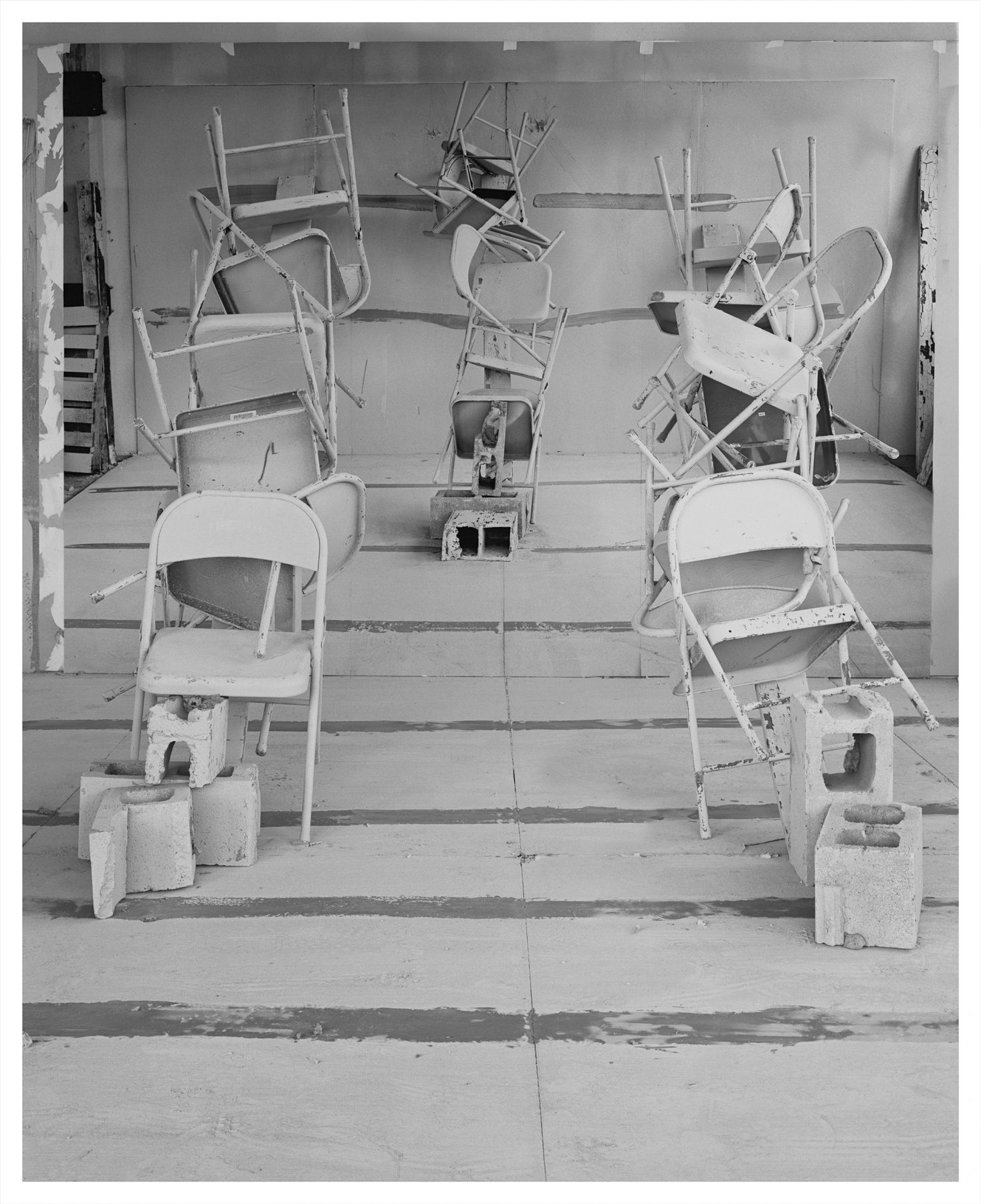 "If Valenzuela’s pictures insist on making poetry from straddling fantasy and fact, they always do so while embracing real-life contingencies. Among these are the hard facts that accrue to poverty, the drudgery and dignity of work, the hope and illusions spun by modern-day politics, and the narrative power of image making." 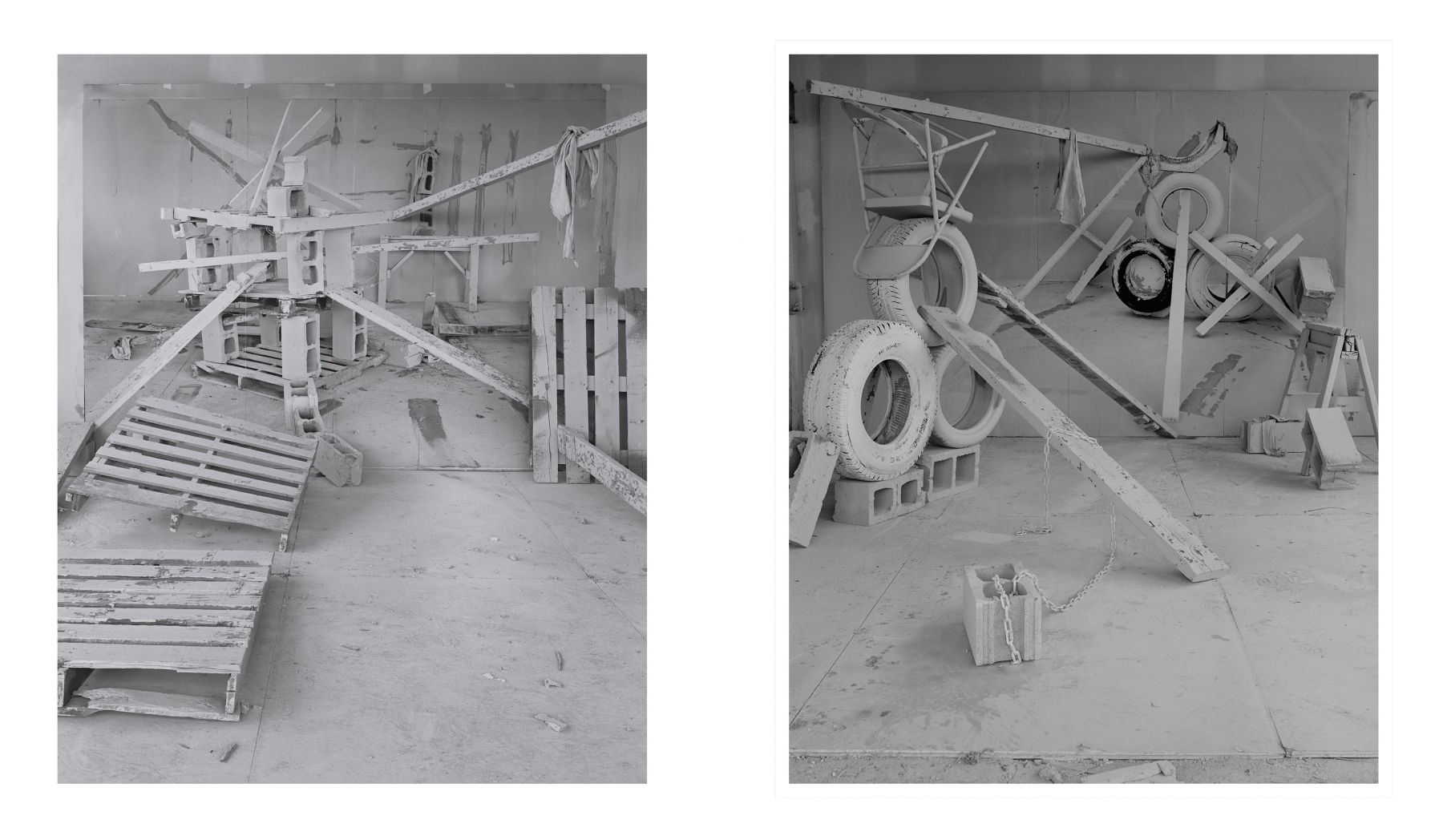 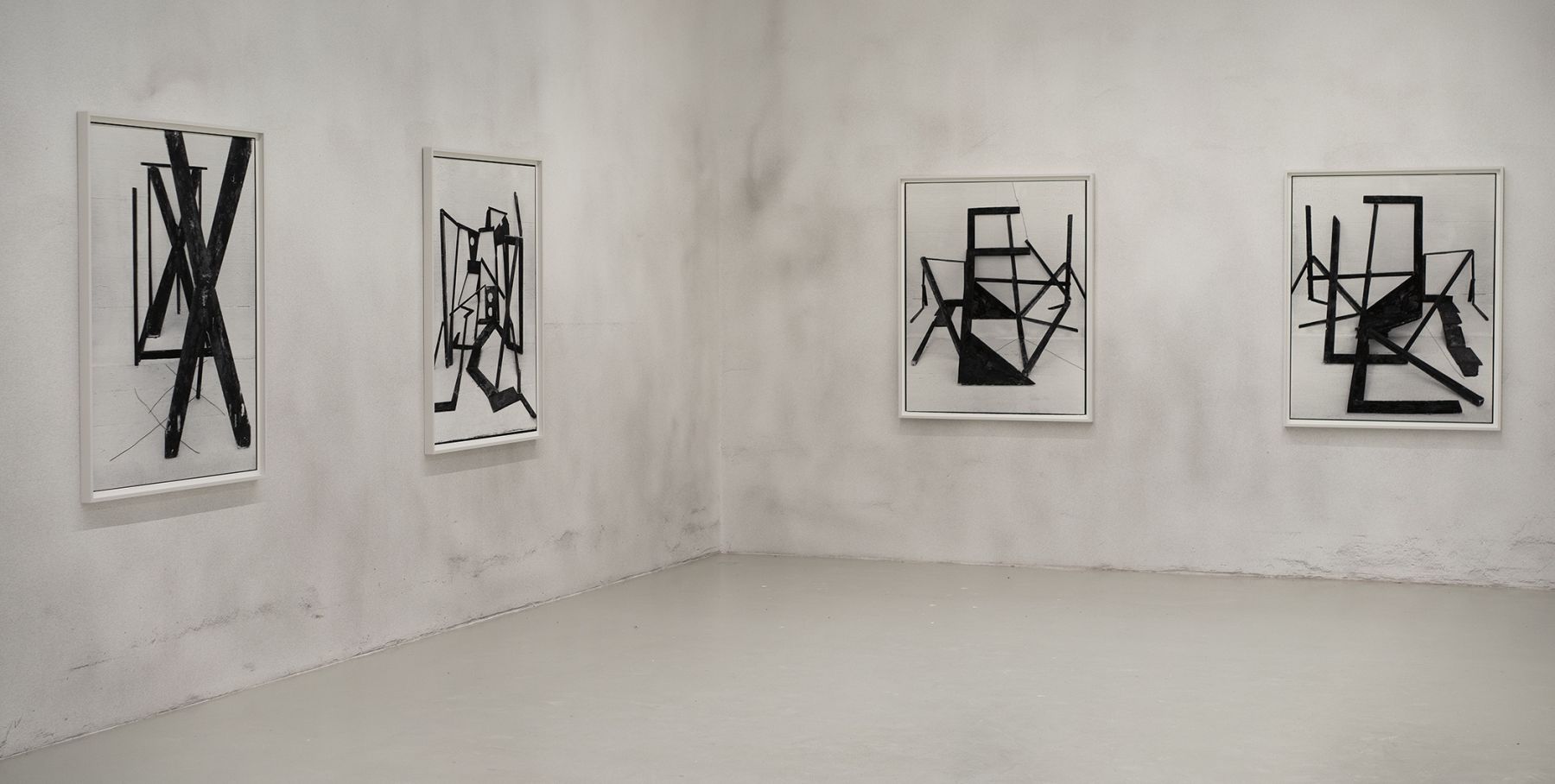 In the American Type series, named after Clement Greenberg's 1955 essay "American-Type Painting", Valenzuela mimics the large abstract gestures of late modernism in order to talk about the absence of content in American Art. 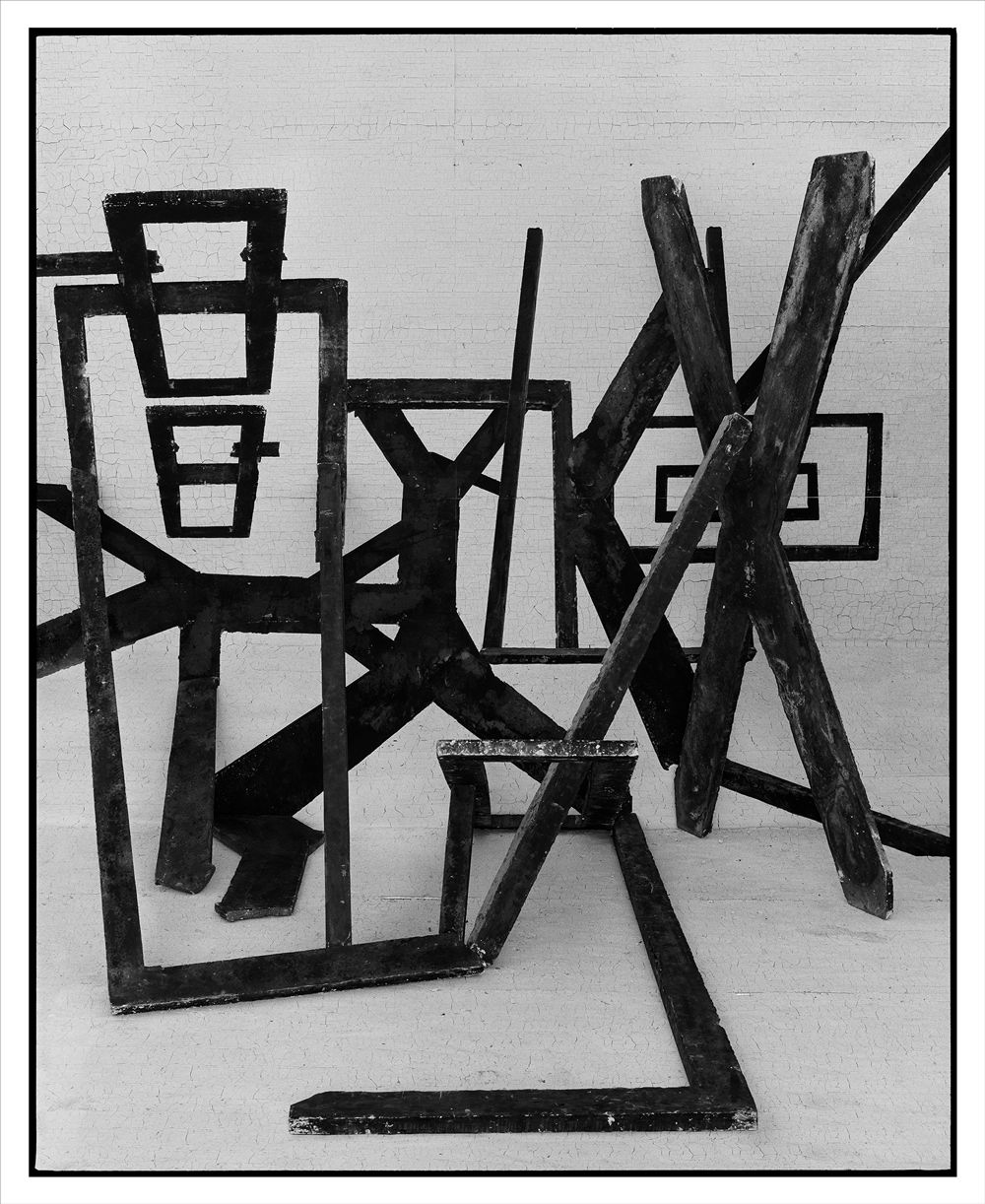 Rodrigo Valenzuela's photographic series "Stature" features eight photogravures taken of assemblages made in the artist's studio. The pre-film photogravure process gives the prints rich grey-sepia tones, lending them an august air, and the configurations of concrete forms resemble anything from Brutalist architecture to monuments, machinery, or monsters. The images mimic the language of documentary photography, but, at odds with their apparent gravitas, the concrete pieces are in fact cast from discarded consumer packaging. Their immobility, too, is an illusion - all the forms are carefully stacked and balanced, rather than cast as a whole or glued in place. Valenzuela's previous work in photography, video, and installation often involves narratives around immigration and the working class. The layering of social critique, art historical awareness, re-evaluation of the traditions of documentary photography, and a sense of play are all equally signature to his work.

Rodrigo Valenzuela talks about the Stature photogravures with Arpad Kovacs, assistant curator of photographs at the J. Paul Getty Museum. This excerpt (6:42 minutes) focuses on the references behind his built structures, from surrealist painting to Latin American brutalist architecture to post-Soviet era bus stops. Other topics covered throughout the talk include philosophical aspects of Valenzuela's photography practice, and the technical aspects involved in making his photogravure prints. 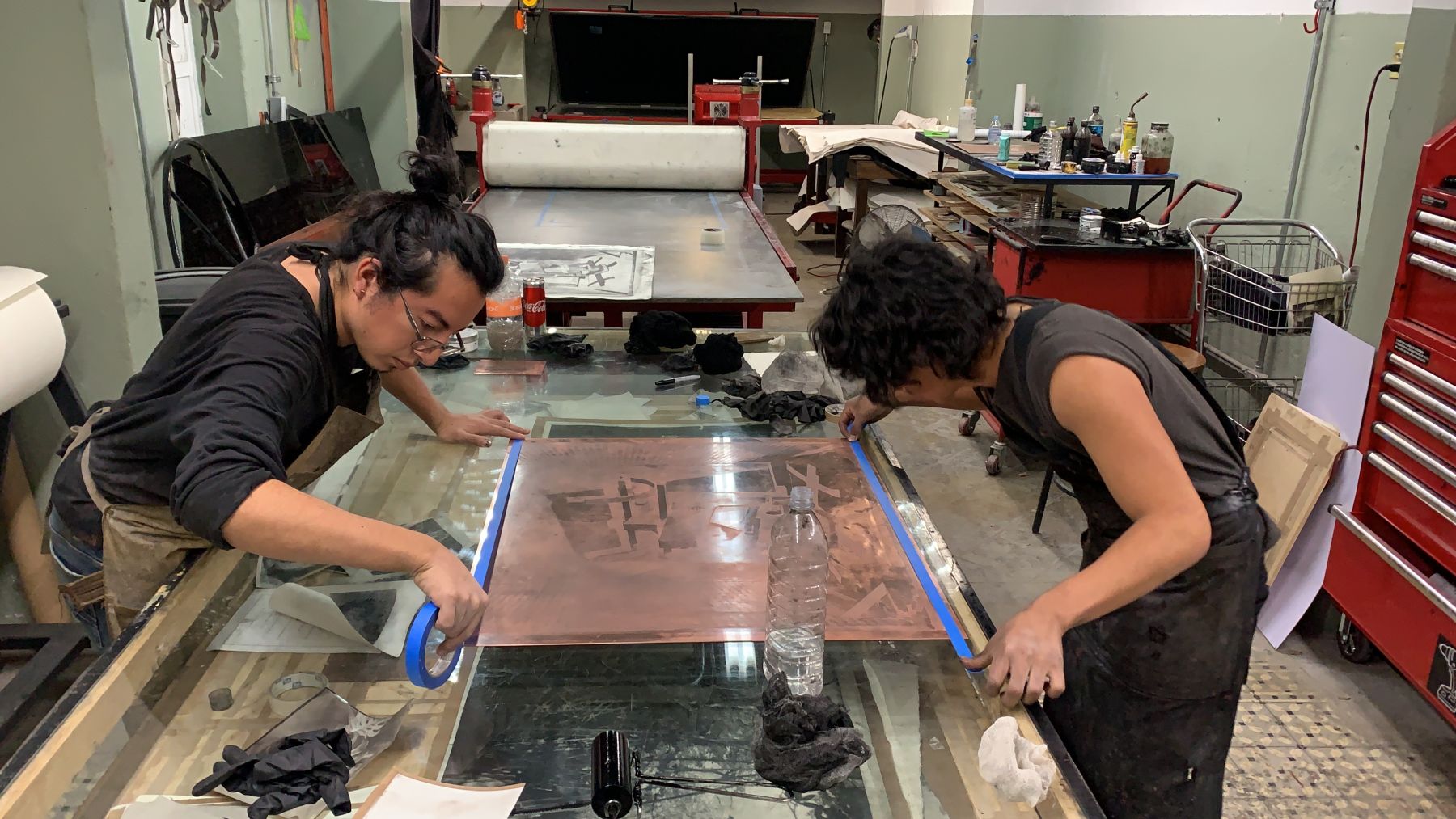 Printing Stature photogravures in the studio, Mexico City. Photo courtesy of the artist.

About the photogravure process

Photogravure printing was one of the first techniques to reproduce photographic images. It is a photomechanical process where a copper plate is etched with an image from a photographic negative, and then inked and run through a printing press. The resulting prints feel organic and tactile, with rich warm black tones and a velvety surface. Valenzuela’s interest in the technique is due to both its materiality and his long-standing interest in labor; it is a heavily physical process that involves the collaboration and labor of multiple people. The painterly process of applying the ink and the heaviness of the copper plates both add to his understanding of the final images. There is an intentionality to the printing, and unlike traditional photography there is a limit to the number of prints that can be made with each plate, making them more unique.

Images are courtesy of the artist. 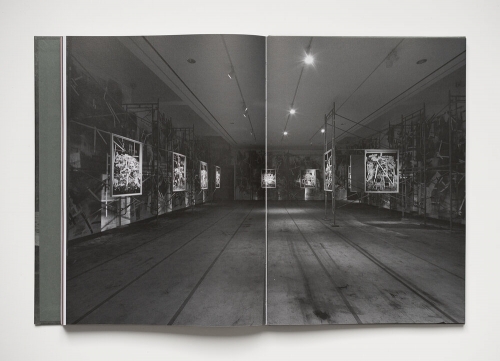